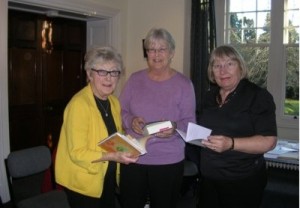 Anne Stooke on the left with Diane Chorley and Nola Turner.

Perhaps because my father was an earnest young man and the product of the self improvement movement that founded the WEA in the early part of this century. He owned a book called “The Comic and Humorous Reciter” as well as volumes of Victorian poets (He also made himself a cat’s whisker radio and took sepia photographs which he developed in the sun.) I guess he was an early influence on me. Also, I was sent to a two woman dame school where nature study and learning poems by heart were the main planks of the curriculum.

I was a teacher in inner London schools for twenty years but in retirement, my husband and I had a small boat. I was the crew, and because, to read makes you seasick, I spent the long hours between ports learning poems. They have been invaluable on sleepless nights.

Being introduced to the SPC through a friend, a few years ago, has broadened my perspective and introduced me to modern and exciting writing. I have found there a friendly and supportive group of people who accept every member with a generosity of spirit. There is no points scoring or one-up-manship and it has given me a lot of pleasure.”