One could say we had a field day on May 24th when the topic for the afternoon was “Sport”. Indeed one poem was about a school Sports Day, and another about a country show. Cricket won the count with five poems related to this game, including, of course, Newbolt’s “Vitai Lampada”, the breathless hush and all that. 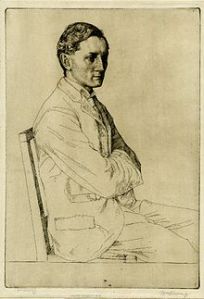 Henry Newbolt No.2 by William Strang 1898

Next came golf and tennis ( and yes, Betjeman featured in both of these), while after that came a parade of sports familiar and ingenious.

We were treated to: an exciting game of ping pong, a memorable defeat at baseball, sea skating, bull fighting, croquet and curling to mention but a few. By the end of the day we were exhausted but had been thoroughly entertained.