I was lucky enough to have had a very good English teacher at school, took English at A.L and started teaching at school with a good reputation for the arts, but sadly, although I was a voracious reader of literature, I found little time to pursue my latent interest in poetry. 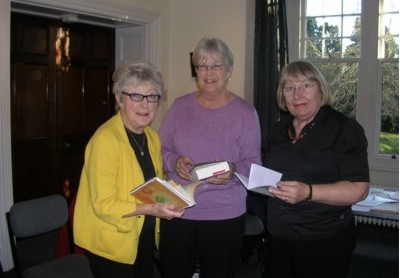 It wasn’t until I became an H.M.I. and spent many hours in hotels around the country, that I found the time to explore a range of poetry styles. I had one or two colleagues who were also interested but we didn’t get much further than haikus! Too much time writing reports that were evidence- based gave little time for imaginative thought.

I was introduced to the Circle by Anne Stooke and, although apprehensive initially, found members very welcoming, especially when I offered to keep a record of the poems read during our sessions! I must confess to being somewhat in awe , and still am, of those members who actually write poems.Through the fortnightly meetings, the themes chosen have given me ample opportunity to remind myself of the great poets of earlier generations and also to explore contemporary poets, including those from overseas. I am enjoying being ‘the first amongst equals’ as President and am very grateful to the committee and members for their support.